The Buddha statue that was saved from the madness of the Taliban regime.

Ten years  have passed after the destruction of the impressive statues of Buddha in Afghanistan by the Taliban.  regime.These statues were declared Unesco world heritage monuments. Luckily  one sculpture of Buddha wasn't destroyed like approximately the rest 2750 statues and sculptures that disappeared from the face of earth.Today this statue is exhibited at the archaeological museum of Britain.

The statue which is 1.2 m. tall was stolen from the archaeological museum of Kambul during the 90s' and it belongs to the art of the Gandhara culture which was strongly influenced by the Hellenistic art. 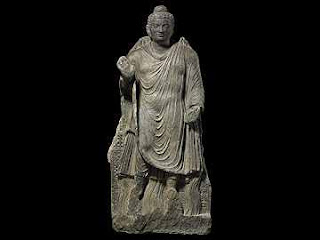 Responsible for saving and preserving the sculpture is a British merchant. He was passionate of the Greco-buddhist art and he recognised a statue of buddha that he had seen years before in the museum of Kambul from a photo that a Japanese merchant had sent to him.
The British merchant explained:


I was begging him to return it back to the museum of Kambul but he was indifferent because the Japanese legislation doesn't prosecute someone who possesses something stolen even if it is an ancient artifact. Thus i decided to purchase it from him

Even though there was a danger with the British legislation he dared to purchase it with the backing of the British archaeological museum. The value of the statue is estimated at 691.000 euros but the British museum claims that it is much more valuable. It is going to be exhibited in the British museum until the 17th of July  when it will be transferred back to Afghanistan.