After the second unsuccesful attack of the Rus against the Byzantine empire in 907 and the Byzantine-Rus treaty of 911 many Rus soldiers flocked in Byzantine lands to serve as mercenaries.

The article 8 of the treaty allowed the Rus to be recruited by the Byzantines either for the purpose of an urgent military campaign or for a more permanent basis. However we cannot exclude that Rus soldiers may have been hired by the Byzantines before 911.

The first reference about Rus in the Byzantine sources is in the year 911. There are mentioned 700 Rus soldiers by Constantine Porphyrogenitos who were recruited by the Byzantine navy for a campaign against the Arab held Crete.For the record this campaign was catastrophic for the Byzantines.

Generally  as long as the Rus were used as a mercenary force they were deployed against Arabs in Crete and Sicily.Perhaps their Northern looks and their height caused terror in the ranks of the Saracens.

The creation of the Varangian guard as a special battalion is attested in 988. Emperor Basil's II land reforms had enfuriated many aristocratic land owners and this triggered a civil war.Vardas Skliros an Aristocrat from Asia minor created an army and marched towards Constantinople. Basil was occupied with dealing with the Bulgarians and couldn't spare forces to deal with Vardas Skliros.He invoked the Byzantine -Rus agreement of 971  by which the Rus were obliged to assist the Byzantine emperor in crucial situation.

At the begining of 988 an army of 6000 chosen warriors(Druzina) were sent  in Constantinople by the Kievan prince Vladimir. As an act of gratitude Basil arranged the marriage of his sister Anna with the Kievan prince initiating a very strong alliance that would have a longterm impact in Russian religious and cultural history.

The Varangians along with the Byzantine imperial army utterly crashed the rebel army in Chrysopolis and Avydos. Those rebellions made Basil to consider the creation of a military unit that would be  loyal to the emperor.As the chronicographer Michael Psellos writes: The emperor  aware of the tendency of the Romans(Byzantines) in treachery assembled an extraordinary force of Scythians(general term of the Byzantines for all the nations living in modern Russia) and he made them his imperial guards.

The nationality of the Varangians varied according to the period and the circumstances. The majority were Vikings coming from Scandinavia Russia and Ukraine. The Byzantine sources refer to them as Rus or Scythians.However major events in Europe caused an influx of other nationalities in the Varangian guard,Particularly in 1066 when William of Normandy invaded England much of the Anglo Danish and Anglo Saxon population fled to continental Europe. Many of them sought a new begining in the Byzantine lands.

Since the 12th century we start having references about English soldiers in the Varagian guard. In fact by the begining of the 13th century until the fall of Constantinople by the Ottomans the majority of the Varangians were English(with some Danes in their ranks)

The Varangians were answering to the Emperor, the Heteriarches(commander of the palace guard) and the Akolouthos(commander of the foreigners of the imperial guard). It's worth to note that during the 11th century(1035-44) the akolouthos was Harald Sigurdson  who later became Harld Hardrada the king of Norway

The salary of each Varangian was very high. Their monthly salary was between 10 to 15 golden coins per month.They were also having a big credit on spoil sharing . For example after the famous Byzantine victory in 1014 at Kleidion the share of the spoils was 1/3 for the emperor , 1/3 for the soldiers and 1/3 for the Varangians. By this way the Byzantine aknowledged their crucial contribution in the battlefield.

Many Scandinavian sagas contain information about the wealth and the life in Constantinople.Archaeological research in Norway has brought many Byzantine coins into light. They were likely conveyed by retired Varangians. An example of the wealth that the Varangians were making during their service in Byzantium was Harald Sigurdson who was able to create a whole army in Norway in order to take the throne.

The Varangians were very loyal to their emperor.They only turned against him if he commited a crime or an outrageous act. There was only one case with the emperor Michael Kalaphates who banished his own mother and this triggered a civil disorder in the city. Eventually Michael was condemned to be blinded and according to Scandinavian sources the process of punishment was commited by Harald Sigurdson.

In war time the Varangians were used for the defence of the capital or the protection and escort of the Emperor in military campaigns. Sometimes if some battles were considered crucial the Varangians were deployed even though the emperor reamained in the city.

The basic weapon of the Varangians was a double edged Scandinavian axe. Another weapon they used was a long single edged sword(Scandinavian sword). Some Byzantine sources refer to spears and bows as additional weapons used by the Varangians.

Their basic defensive weapon was a shield. It was  round wooden with metal additions.Later influenced by the Byzantines they used triangular shields. 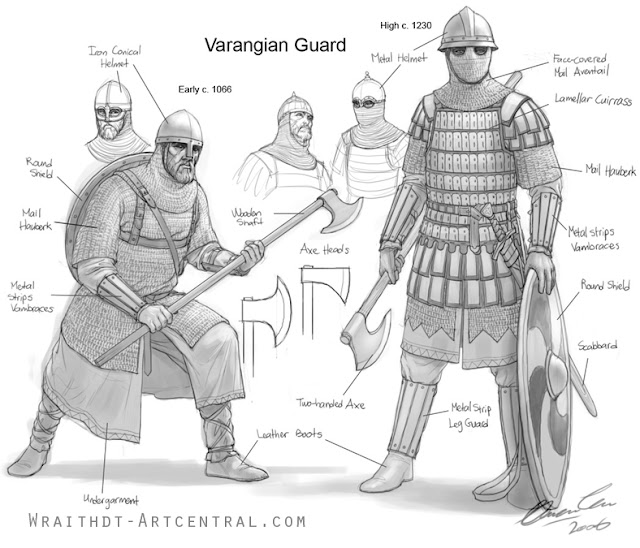 The defensive battle tactic of the Varangians was called (Skjaldborg). With this formation they created an unpenetrable wall with their shields and axes.Their offensive formation was triangular. They were charging on the enemy lines causing fear and panick to the enemies. They were so brave and bold according to the Byzantine sources that modern historians assume that there may have been Bersekers among the Varangians.Bersekers were  warriors who used drugs to come into some sort of war ecstasy during a battle.