Marie Spartali was born in Middlesex in 1843. Her father was a rich Greek merchant called Mickael Spartalis.
Mickael Spartalis was a member of the Greek community in Britain and occasionally he was working as a Greek consul in Britain. Her mother was Euphrosyne Varsami a daughter of an Greek merchant from Genoa.
Her childhood life helped Marie Spartali a lot for becoming a painter. The house she was living had a view over Chelsea and Thames and the setting was idyllic. Her father hosted numerous garden parties where he invited various artists and writers of London.
When she grew up she was notably beautiful and along with two other friends of greek heritage thei were labeled as the three graces(greek mythology). In one of the high society parties she met two great British figures Whistler and Swinburne.Since 1864 she became a student of Ford Madox Brown. Because of her beauty she modelled for many pre-Raphaelite painters like Whistler, Rosetti ,Spencer Stanhope and  Ford Brown.She became herself a prominent pre-Raphaelite painter and until her death she produced 170 paintings.

In 1871 she married an American journalist called William J. Stillman . It was William's second marriage cause his first wife had commited suicide two years before. That's why her parents were strongly opposed to this marriage. Because of William's profession Marie had to travel to many places like Florence , Rome and the United States. She had three children and nowadays there are many of her descendants living. She died in 1927 and ironically she wrote as a last will:  "It seems rather absurd to make a will when one has neither possessions nor money to leave". Today her work is valued at 500 million dollars.


As a painter she belonged to the pre-Raphaelite movement. Her models were mainly female and her themes were English and Italian plays. She also painted Italian landscapes.During her life not much of her work was sold that's why she probably she underestimated it.

"Mrs. Stillman (Obituary)."At her death in her eighty-fourth year, Marie Spartali Stillman was the last of the small circle of women who contributed significantly to the               Pre-Raphaelite movement. The daughter of wealthy and educated Anglo-Greek parents, she married W. J. Stillman, a widower with three children. They had three more children together, and while her parental, wifely, and domestic duties did not allow her to pursue her own art with the concentration it deserved, she was an important friend and colleague in the studios and households of Burne-Jones, Morris, Rossetti and others. Her legendary beauty is imperfectly preserved in Dante Gabriel Rossetti's paintings; photographs do not do her justice, either. Her intelligence, charm, sense of humour, and spirit were valued by the many people whose lives she touched. 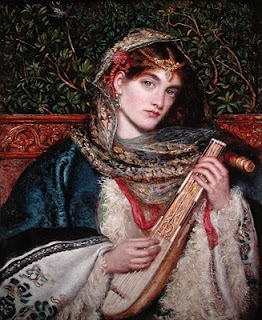 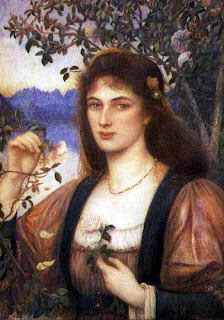