Women Physicians were not uncommon in the ancient world but in the city state of Athens around the 4rth century BC women were forbidden on pain of death to practice medicine because they were thought to perform abortions.
Agnodice defied the law and with the help of her grateful patients ,suceeded in having it changed. Her story is recounted by the Roman historian Hyginus and was traslated into English in 1687. Agnodice was a wealthy woman of Athens.


According to legend, Agnodice wanted to learn medicine. By cutting her hair and wearing men's clothing, she was able to become a student of the famous Alexandrian physician, Herophilus. After her studies were completed, she heard a woman crying out in the throes of labor and went to her assistance. The woman, thinking Agnodice was a man, refused her help. However, Agnodice lifted up her clothes and revealed that she was a woman. The female patients then allowed Agnodice to treat them. When the male doctors discovered that their services were not wanted, they accused  Agnodice of seducing their patients. They also claimed that the women had feigned illness in order to get visits from Agnodice.

Many women died during childbirth or of private diseases because they were too embarassed to visit male physicians . Speaking to one potential patient , Agnodice confessed her secret . The other women then allowed Agnodice to treat her and was cured perfectly . Word spread and she became popular and succesful among women.


The male doctors discovered the truth and Agnodice was put on trial.Her patients among the most influential women in Athens stormed the courtroom.They told the judges that they would no longer account them for husbants and friends but as enemies .
They even threatened to die with her.

When Agnodice was brought to trial, she was condemned  by the leading men of Athens. At this point, their wives became involved. According to Hyginus, they argued that "you men are not spouses but enemies, since you're condemning her who discovered health for us." Their argument prevailed and the law was amended so that freeborn women could study medicine."

Bowing on the women's pressure the men not only released Agnodice  but changed the law.After that any freeborn Athenian woman could become a physician as long as she treated only female patients.


According to an article of  University of Virginia  Health sciences library website Agnodice may "belong to the realm of myth and folktale rather than having been a historical figure. However her story illustrates real problems that women patients and women who gave other women medical help during childbirth, called midwives faced in Athens. 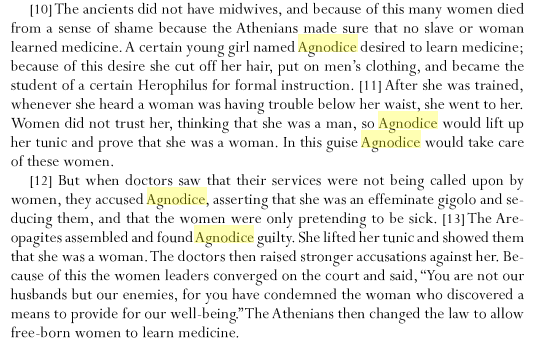