Bulgari the Epirot who went to Rome and created his own Empire.

Sotirio Bulgari was born in 1857 in the Epirus Mountains, through which flows the Acheron (source of the legendary River Styx) and upon which stands the Temple of Zeus at Dodona.More specifically it was the town of Paramythia in the Thesprotia region. The town of Paramythia existed since 1000 BC and in middle ages it was an importan Byzantine town-fort.


In this region the silversmith’s art has been passed down from father to son since the Byzantine era(when Constantinople fell in 1204 the refugees went towards two destinations Nicaea in Minor Asia and Epirus.The notorious Byzantine jewerly is a very big subject which i will deal with in an another post), and it was from the power of this tradition, from the technical skills that had evolved over centuries and from the vast classical imaginarium rooted in these very places that the young Sotirio Bulgari cultivated a vision that has proven to transcend the boundaries of time and space, the courage and foresight of which is especially apparent.


The word “vision” derives from Greek and Latin to give us the word “idea”. Sotirio Bulgari discovered that he had a sharp entrepreneurial instinct, so when he sensed an epochal change in the air, he set out for a Europe that was on the verge of becoming modern. 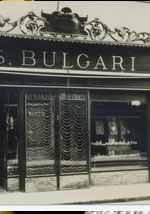 He left continental Greece for Corfu, winter home of Princess Sissi and the Hapsburg court, and then moved on to the recently unified Italy, heart of the ‘Grand Tour’(grand tour was an early type of tourism. It was for aristocrats or wealthy western europeans who were travelling to Italy to visit its monuments) that was  de rigeur among Europe’s aristocracy, stopping first in Naples and finally in Rome. He brought with him an extraordinary cultural heritage of imagery and traditions and timeless glamour. Driven by a boldness that enabled him to overcome obstacles and conventions alike, Sotirio Bulgari decided not to limit himself to the Eternal City he had chosen as his home.


His journeys, facilitated by new means of transport like thetrain and the automobile, took him to the favoured locales of European high society and the aesthetic sensibility cultivated there. His vision overturned numerous existing assumptions and anticipated many concepts that have since become the norm. From season to season, he brought his style directly to the most exclusive and sophisticated tourist destinations of the time – St. Moritz, Lucerne, Bellagio, Sanremo and Sorrento – and was gradually able to create an international network of ten stores, where his creations generated admiration and wonder among the aristocracy, which in turn consolidated his reputation and fame.


Sotirio Bulgari’s classical sensibility and powerful creative spirit came together to define a path characterised by innovation: from his deep roots there grew a uniquely original aesthetic that challenged  reigning  stylistic orthodoxies. Today, the sign on the storefront in Via Condotti evokes not only Roman epigraphy but an entire philosophy of beauty, wherein the past informs the contemporary in a process of continual transformation. Sotirio Bulgari was, by nature and by choice, a ‘global citizen’ in the most modern sense of the term; a traveller who had embraced and absorbed several cultures and had the ability to combine entrepreneurial spirit with artistic sensibility. Aware that he was destined to transcend the boundaries of his time, he built his empire of beauty; an empire founded on taste and magnificence that his sons Giorgio and Costantino inheritedin 1932, along with the vision that was born with their father and a talent for constantly honing his originality, such that in the years to come they were able to definitively earn a place for Bulgari in the history of fine jewellery.


In the words of Gonzales-Palacios, «the history of jewellery is an infinite cycle of give and take between past and present, between Classical and Baroque, between splendour and restraint”; a history that is born of a living ancient tradition, capable of continually generating formal and technical innovations. Herein lies the vision, as relevant today as 125 years ago, of Sotirio Bulgari.


1857 Sotirio Bulgari was born in Greece where he becomes a silversmith.
1879 Sotirio moves to Rome and begins selling silver at Trinità dei Monti.
(At the very beginning he sold his objects in front of the French Academy on the Pincio. Then a Greek merchant offered to let him display his objects in a corner of the window of his shop, placed at the beginning of Via Sistina.)
1894 The business is transferred to a shop in via dei Condotti 28.
( In 1894 he moved to 28 Via Condotti. In 1905 he moved the store to Via dei Condotti 10. It was called "Old Curiosity Shop" from the title of a Charles Dickens novel. This name was chosen in order to attract British and American tourists.)
1905 The Bvlgari store in Via Condotti 10 opens, to become the Bvlgari historic flagship store.
1932 Sotirio passes away leaving the business in the hands of his two sons, Giorgio and Costantino, who developed a passionate interest in precious stones and jewels.

The Vogt sterling and leather company is a small family owned business that has been building fine sterling and leather accessories for over 35 years. Today cattle rancher, Chet Vogt, and his son Casey own and operate Vogt Western Silver, and continue to inject the family's ranch-raised, outdoorsman background into the design and construction of these quality products.