I will be posting some traslations from a text written in form of political advice by Basil I the Byzantine emperor adressing towards his son and future successor Emperor Leo the wise.This text encompasses in general the political though of the medieval Byzantines which contributed to the longvenity of the empire the political vision of various nations that interacted with Byzantium. The genre of the text is called royal andriantas(full body statue) and it reveals the political thought and the ideas of emperor Basil in 66(units-subjects)

About Education- Περι παιδείας (1rst unit)
Education and learning is something very important not only for the civilians but also for the royalty. It is favourable for humans as it helps keeping a physical and mental health.The study of the religious scripts helps the mental part while gymnastics and other knowledges help help the physical part.
This Education(personification), my son Leo me your father and co-imperator advise you to keep her near you like a woman or queen of your kingdom.Cause through her the kings have a notorious name and makes them immortal. Because like when the sunrays don't reach earth everything is dark the same happens with our soul and education.Keep this advice if you want a succesful and pious life. Because  virtue is the only immortal thing from the anything else that a man can acquire in his life. 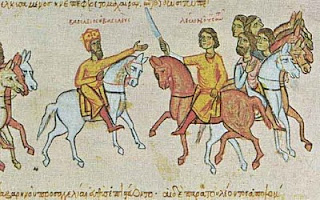