There was a woman at Alexandria named Hypatia, daughter of the philosopher Theon, who made such attainments in literature and science, as to far surpass all the philosophers of her own time. Having succeeded to the school of Plato and Plotinus, she explained the principles of philosophy to her auditors, many of whom came from a distance to receive her instructions. On account of the self-possession and ease of manner, which she had acquired in consequence of the cultivation of her mind, she not unfrequently appeared in public in presence of the magistrates. Neither did she feel abashed in going to an assembly of men. For all men on account of her extraordinary dignity and virtue admired her the more. Yet even she fell victim to the political jealousy which at that time prevailed. For as she had frequent interviews with Orestes, it was calumniously reported among the Christian populace, that it was she who prevented Orestes from being reconciled to the bishop. Some of them, therefore, hurried away by a fierce and bigoted zeal, whose ringleader was a reader named Peter, waylaid her returning home, and dragging her from her carriage, they took her to the church called Caesareum, where they completely stripped her, and then murdered her with tiles.* After tearing her body in pieces, they took her mangled limbs to a place called Cinaron, and there burnt them. This affair brought not the least opprobrium, not only upon Cyril, but also upon the whole Alexandrian church. And surely nothing can be farther from the spirit of Christianity than the allowance of massacres, fights, and transactions of that sort. This happened in the month of March during Lent, in the fourth year of Cyril's episcopate, under the tenth consulate of Honorius, and the sixth of Theodosius.

Notes
* The Greek word is ostrakois, literally "oystershells," but the word was also applied to brick tiles used on the roofs of houses. 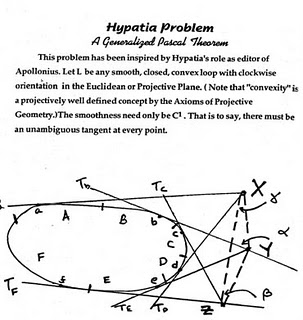 HYPATIA, daughter of Theon the geometer and philosopher of Alexandria, was herself a well-known philosopher. She was the wife of the philosopher Isidorus, and she flourished under the Emperor Arcadius. Author of a commentary on Diophantus, she also wrote a work called The Astronomical Canon and a commentary on The Conics of Apollonius. She was torn apart by the Alexandrians and her body was mocked and scattered through the whole city. This happened because of envy and her outstanding wisdom especially regarding astronomy. Some say Cyril was responsible for this outrage; others blame the Alexandrians' innate ferocity and violent tendencies for they dealt with many of their bishops in the same manner, for example George and Proterius.

Regarding Hypatia the Philosopher and the Sedition of the Alexandrians

Hypatia was born, reared, and educated in Alexandria. Since she had greater genius than her father, she was not satisfied with his instruction in mathematical subjects; she also devoted herself diligently to all of philosophy.
The woman used to put on her philosopher's cloak and walk through the middle of town and publicly interpret Plato, Aristotle, or the works of any other philosopher to those who wished to hear her. In addition to her expertise in teaching she rose to the pinnacle of civic virtue. She was both just and chaste and remained always a virgin. She was so beautiful and shapely that one of her students fell in love with her and was unable to control himself and openly showed her a sign of his infatuation. Uninformed reports had Hypatia curing him of his affliction with the help of music. The truth is that the story about music is corrupt. Actually, she gathered rags that had been stained during her period and showed them to him as a sign of her unclean descent and said, "This is what you love, young man, and it isn't beautiful!" He was so affected by shame and amazement at the ugly sight that he experienced a change of heart and went away a better man.
Such was Hypatia, as articulate and eloquent in speaking as she was prudent and civil in her deeds. The whole city rightly loved her and worshipped her in a remarkable way, but the rulers of the city from the first envied her, something that often happened at Athens too. For even if philosophy itself had perished, nevertheless, its name still seems magnificent and venerable to the men who exercise leadership in the state. Thus it happened one day that Cyril, bishop of the opposition sect [i.e. Christianity] was passing by Hypatia's house, and he saw a great crowd of people and horses in front of her door. Some were arriving, some departing, and others standing around. When he asked why there was a crowd there and what all the fuss was about, he was told by her followers that it was the house of Hypatia the philosopher and she was about to greet them. When Cyril learned this he was so struck with envy that he immediately began plotting her murder and the most heinous form of murder at that. For when Hypatia emerged from her house, in her accustomed manner, a throng of merciless and ferocious men who feared neither divine punishment nor human revenge attacked and cut her down, thus committing an outrageous and disgraceful deed against their fatherland. The Emperor was angry, and he would have avenged her had not Aedesius been bribed. Thus the Emperor remitted the punishment onto his own head and family for his descendant paid the price. The memory of these events is still vivid among the Alexandrians.

source: Damascius's Life of Isidore, reproduced in The Suda