Basileios Bessarion was born in Trebizond between 1389-1395 . At a young age he went to Constantinople and became a student of the archbishop Dositheos who was said to be a wise man. Dositheos saw the promising potential of Bessarion and sent him to the bishop of Sillymbria to teach him rhetorics and philosophy.

After a few years he went to Peloponnese or Morea as it was called at this time to become a student of the great neo-platonist philosopher Georgios Gemistos Pletho.There he was able to master his philosophical knowledge and acquire more knowledge on the field of mathematics.
In Peloponese Bessario became a very popular person because of his knowledge and eloquence. When he was preaching at the church all the people were listening speechless every word he was uttering. His fame soon passed the borders of Peloponnese and reached the capital of Byzantium and even further the Empire of Trebizond. The emperor of Trebizond first sent ambassadors to invite him to Trebizond in Pontos.

Bessarion chose to go to Constantinople instead where he was welcomed by the emperor himself. In 1437 he was appointed archbishop of Nicaea by the Patriarch.The next year he escorted the emperor along with other  scholars and church officials to the synod of Florence were the union of the Eastern and Western church would be ratified.
At the conference Bessario and Markos Eugenikos were the people who excelled with their knowledge and argumentation but while the latter was denouncing this union the Bessario was a pro-unionist and when an agreement was reached he signed it.

Upon his return to Constantinople the situation was no longer good for him.The majority of the population didn't want this union and only a minority including the emperor were unionists. Under this situation of political and religious turmoil Bessario returned back to Italy and defected to the side of the Pope. As a reward he was appointed Cardinal in 1439. He was under the protection of Pope Nicolaus V who as many other people saw that he was a charismatic person. Bessarion proved his talent when he was sent to Bononia to cease a civil war.Not only he succeeded but he also built a gymnasium promoting the education of the youth. The people of Bononia as a gratitude for his service they left a public script writting the following: Bessarioni episcopo Tusculano,cardinali niceno,benefactori nostri. 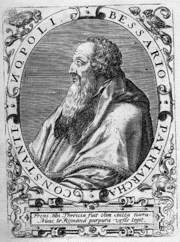 In 1455 the Pope died and the Bessario as a cardinal he had to return back to Rome to participate at the elections for the new Pope. He would be a favourite to become the new pope if there was not the the cardinal and archbishop of Avignon Alanus who in a speech full of religious fanatism and hatred argued that it would be preposterous to make an ex-schismatic the head of the catholic church. His main arguments were that even though Bessario became a catholic he still maintained his beard that only Orthodox clerics had and that he was still loyal to some aspects of the doctrine of Orthodoxy.
The new pope named Kallistus was also fond of Bessarion. He appointed him to call for a new crusade to Constantinople. However Bessario failed on this task because the European kingdoms in this period were having their own wars.

In  1458 a new pope was elected called Pius II. He was more active than his predecessor calling for a big conference of all kings in Mantua. In this conference the rhetoric of Bessario for the urge of a crusade against the Ottoman empire which in 1453 had already conquered Constantinople stunned everyone but once more the civil war between the Germanic states stalled all preparations for this crusade.
Bessario didn't give up, he went to Venice to speak about the need of a crusade and then he was sent by the Pope in Germany to try and find a solution for the civil war. In Nuremberg he invited all the German leaders of the opposing sides and with a touching speech  he argued once again the need for a ceasefire and a crusade against the infidels. But once again he failed because the zeal and hatred of the Germans for each other was higher than their will to fight in a crusade. Disappointed the cardinal left Germany and went to Vienna to meet the emperor himself and try to persuade him but there he also found the internal strife obstacle.


He returned back to Rome mentally and physically exhausted. His friend the Pope Pius  prepared a crusade despite the indefference of the European kings. He was so sure for its success that he appointed Bessarion Patriarch of Constantinople. Bessario would start with a fleet from Venice and he would meet the Pope's army which was lead by himself in Ancona. But once more irony and the bad circumastances terminated the crusade. When he was about to start the Pope fell ill and died the same year.

In 1471 he was once more a favourite for becoming the pope. There are dubious narrations about this election. Some historians say that some cardinals approached Bessario to vote him in exchange of benefits whom Bessario as a man of morality  rejected and to avenge him they all vote his main opponent candidate. 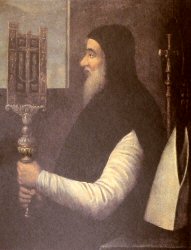 Others say that there was a plastography of votes in favour of the new pope and against Bessario. What happened in real noone knows.However the new pope named Sixtus IV was also fond of a crusade against the Ottomans and sent  Bessario in France to cease the hostilities between the king and the duke of Bourgundy. But his meeting with the king was short and a failure. Once the King saw the cardinal with the beard he had an outburst and cried the following :Barbara graeca genus retinent, barbara solebant.
Dissapointed by this last effort and succesive failure he returned back to Ravenna where he died in November 19th ,1472.
Bessarion was a pious man with many attributes that could make him a succesful Pope if his beard and nationality weren't there as obstacles. It's sure that his choice to join the Catholic church was the best cause if he remained in the east he would remain an anonymous priest or rather worse he would have died in the siege of Constantinople.

Bessario was a pro humanist and a contributor in the Italian Renaissance.He conveyed in Italy the Neoplatonic ideas of his teacher Gemistos Pletho and wrote many manuscripts and traslations of ancient Philosophers,  he helped Greek-Byzantine refugees to educate themselves in the best universities of Italy and he donated his library consisting of 30.000 books to the state of Venice which today form the nucleus of the notorious biblioteca marciana of Saint Marc.

Hello, thanks for posting this