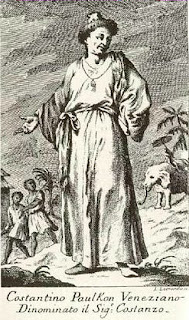 Constantine Phaulkon (born Κωνσταντίνος Γεράκης or Constantinos Gerakis; Geraki is the Greek word for falcon, in French Monsieur Constance, in Thaiเจ้าพระยา วิชาเยนทร์ - Chao Phraya Wichayen, in Portuguese Constantino Falcão) (1647 - June 5, 1688) was a Greek adventurer, who became first counsellor to King Naria of Ayutthaya.
Born on the Ionian island of Kefalonia, Phaulkon came to Siam (today's Thailand) as a merchant in 1675 after working for England's East India Company. He became fluent in Thai in just a few years and began to work at the court of King Narai as a translator (he was also fluent in English, French, Portuguese, and Malay). Due to his experience with the East India Company, he was soon able to become a counsellor of the king.
In 1682, Phaulkon abandoned Anglicanism for Catholicism and soon after married a Catholic woman of mixed Japanese Portugal-Bengali descent named Maria Guyomar de Pinha. They lived a life of affluence as Phaulkon rose to become highly influential at the Siamese court of king Narai.
Following troubles with the English and the Dutch, Phaulkon engineered a Franco-Siamese rapprochement leading to the exchange of numerous embassies between France and Siam, as well as the dispatch of an expeditionary force by the French in 1687. Phaukon was called "Monsieur Constance" by the French, and was their main ally for several years.
The Abbe de Choissy, who was part of the first French embassy to Thailand in 1685, wrote about M. Phaulkon's character:

"He was one of those in the world who have the most wit, liberality, magnificence, intrepidity, and was full of great projects, but perhaps he only wanted to have French troops in order to try and make himself king after the death of his master, which he saw as imminent. He was proud, cruel, pitiless, and with inordinate ambition. He supported the Christian religion because it could support him; but I would never have trusted him in things in which his own advancement was not involved"
—Abbe de Choissy, Mémoires pour servir à l'histoire de Louis XIV, 1983:150.

Phaulkon's closeness to the king naturally earned him the envy of some Thai members of the royal court, which would eventually prove to be his undoing. When King Narai became terminally ill, a rumor spread that Phaulkon wanted to use the designated heir, Phra Pui, as a puppet and actually become ruler himself. As unlikely as this was, it provided an excuse for Pra Phetrarcha, the foster brother of Narai to stage a coup d'etat the 1688 Siamese revolution. Without the king's knowledge, both Phaulkon and his followers as well as the royal heir were arrested and executed on June 5, 1688 in Lopburi. When King Narai learned what had happened, he was furious -- but was too weak to take any action. Narai died several days later, virtually a prisoner in his own palace. Phetracha then proclaimed himself the new king of Siam and began a xenophobic regime which expelled almost all foreigners from the kingdom.
The different interpretations of Phetracha's motivation for ordering the arrest and execution of Phaulkon have made the Greek's position in Thai history somewhat controversial. Supporters of Phetracha's actions have depicted Phaulkon as an opportunistic foreigner who sought to use his influence to control of the kingdom on behalf of Western interests. More skeptical historians believe that Phaulkon was simply a convenient scapegoat - a means for Phetracha to seize the throne from the rightful heir by capitalizing on the envy and suspicion Phaulkon had engendered.