"Actually, the whole thing started when I asked my mother if there was going to be a war.  There was always something on television about missiles and nuclear bombs.  Once I watched a science show on public television and the scientists said that a nuclear war would wreck the Earth and destroy the atmosphere.  Nobody would win a nuclear war.  I remembered that I woke up one morning and wondered if this was going to be the last day of the Earth.

I asked my mother who would start a war and why.  She showed me a news magazine with a story about America and Russia, one that had a picture of the new Russian leader, Yuri Andropov, on the cover.  We read it together.  It seemed that the people in both Russia and America were worried that the other country would start a nuclear war.  It all seemed so dumb to me.  I had learned about the awful things that had happened during World War II, so I thought that nobody would ever want to have another war.  I told Mom that she should write to Mr. Andropov to find out who was causing all the trouble.  She said, "Why don't you write to him?" So I did."
When Samantha Smith was killed in a plane crash on August 25, 1985, millions of people all over the world grieved as if for their own child.  For, in a way, she was a child of the world - a symbol of childhood itself, a guardian of our dreams and hopes for children everywhere.  The heads of the two most powerful nations on earth sent the following condolences to Samantha's mother, Jane.

Dear Mr. Andropov,My name is Samantha Smith. I am ten years old. Congratulations on your new job. I have been worrying about Russia and the United States getting into a nuclear war. Are you going to vote to have a war or not? If you aren't please tell me how you are going to help to not have a war. This question you do not have to answer, but I would like to know why you want to conquer the world or at least our country. God made the world for us to live together in peace and not to fight.Sincerely,Samantha Smith

December 1982:  Ten-year old Samantha Smith of Manchester, ME writes a letter to Soviet Premier Yuri Andropov to express her worry about the United States and The USSR getting into a nuclear war. 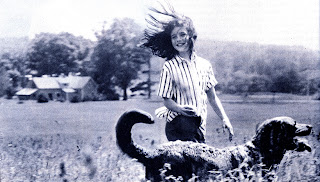 April 1983:  Andropov replies to Samantha reassuring her that the Soviet Union wants no war with the United States.  He invites her to visit the Soviet Union.
July 1983: Samantha, accompanied by her parents, leaves for a two-week trip to the Soviet Union.  She visits Moscow, Leningrad, and the summer camp 'Artek'.
December 1983: Samantha goes on a 10-day trip to Japan, where she delivers a speech at the Children's International Symposium.
February 1985:  An action-adventure television series featuring Samantha is announced.  The show, starring Robert Wagner, is first called "J.G. Culver", then renamed "Lime Street."
August 25, 1985:  Samantha, 13, and her father, Arthur Smith, are killed in a Bar Harbor Airlines crash near Auburn, ME.
October 1985:  The Samantha Smith Foundation is established.  It is a non-profit foundation fostering international understanding.
December 1986:  A statue of Samantha is unveiled in front of the State Cultural Building.  It shows Samantha releasing a dove, with a bear cub at her side.
source:http://www.samanthasmith.info/
Αναρτήθηκε από Spiros