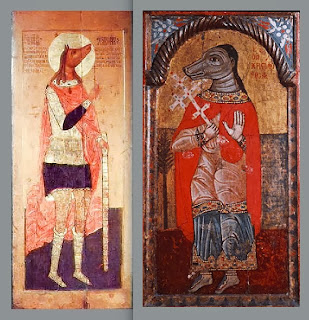 Saint Christopher is considered by the church the patron of motorcars and baby buggies.His legendary acts were mainly centered in the Black sea region.According to his hagiography Saint Christopher was a giant belonging to cynocephalic race, in the land of Chananeans(the Canines),who eat human flesh and only form of communication is barking. His original name was Reprebos(the condemned) and corresponded to his nature. He was black,ferocious and dreadful.One day he asked the god to show his power by giving him the gift of human speech.Then an angel came down, blew on in his mouth and suddenly the Saint was able to speak Greek.Still a proud giant he is cut down to size by the Christ child who commands that he carry him over a river. As he advanced into the flood,the child was becoming heavier and heavier. When Christopher was not able to go further,the child revealed its true nature and Christorer having learned his lesson devoted himself to Christian service. He was later caught by Roman authorities and martyred in the region of Lycia(land of the wolves).