People who refused to die

Through history humanity has exceeding a lot of times its limits.Here are some examples of people who either from luck ,duty or desire to live succeeded to survive through lethal circumstances.

Hiroo Onoda
A Japanese soldier who remained in a Philippine jungle for 30 years after the end of WWII.
On December 17, 1944, Lt. Hiroo Onoda left for the Philippines to join the Sugi Brigade (the Eighth Division from Hirosaki). Here, Onoda was given orders by Major Yoshimi Taniguchi and Major Takahashi. Onoda was ordered to lead the Lubang Garrison in guerrilla warfare. As Onoda and his comrades were getting ready to leave on their separate missions, they stopped by to report to the division commander. The division commander ordered:

You are absolutely forbidden to die by your own hand. It may take three years, it may take five, but whatever happens, we'll come back for you. Until then, so long as you have one soldier, you are to continue to lead him. You may have to live on coconuts. If that's the case, live on coconuts! Under no circumstances are you to give up your life voluntarily.

Onoda took these words more literally and seriously than the division commander could ever have meant them.

Onoda remained in the jungle along with his comrades for 30 years. During these years all the others died except him. When he was found, he refused to believe that Japan lost the war. He needed to hear it from his commander himself. Thus his commander, a booksheller travelled to the Philippines to order Onoda to surrender.

A WWII castaway in the Atlantic ocean. He was on a British navy ship which was sunk by a German U-boat. He survived on a raft for 133 days!

On April 5, 1943, after 133 days in the life raft, Poon Lim neared land and a river inlet. A few days earlier, he had known that he was close to the land because the colour of the water had changed; it was no longer the oceanic deep blue. Three Brazilian fishermen rescued him and took him to Belém three days later.

Steven Callahan
He survived for 76 days inside a life-raft having consumed only 8 glasses of water and 3 kgs of food. 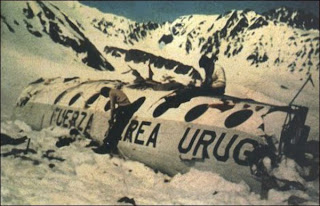 15 passengers of the flight survived for 72 days after their plane crashed on the Andes mountains.They had to feed from dead passengers in order to survive.

Slavomir Rawicz
He was a Polish lieutenant who was imprisoned by the Soviets.In 1942 he escaped from a Soviet Gulag and walked on foot along with six other persons through Siberia, Gobi desert and Tibet to reach British India.

A German Peruvian school student who fell from a height of 10.000 feet(3.2 kms) and survived. Her plane was hit by a thunder and broke up, she survived the fall perhaps because she was strapped in her seat and somehow it buffered the crash.The real adventure would start after the fall as her glasses were broken and she was in an unhospitable jungle.She followed the survival principle her father taught her. She followed a water stream that eventually led her to civilization.

A Russian scientist in Antarctica. He carried out an apendectomy on himself.His condition was urgent and the nearest research station where he could ask for help was 1600 km away. With the help of a driver and a meteorologist who were giving him surgery tools and holding the mirror he removed the appendix after a 2 hours long self-surgery.