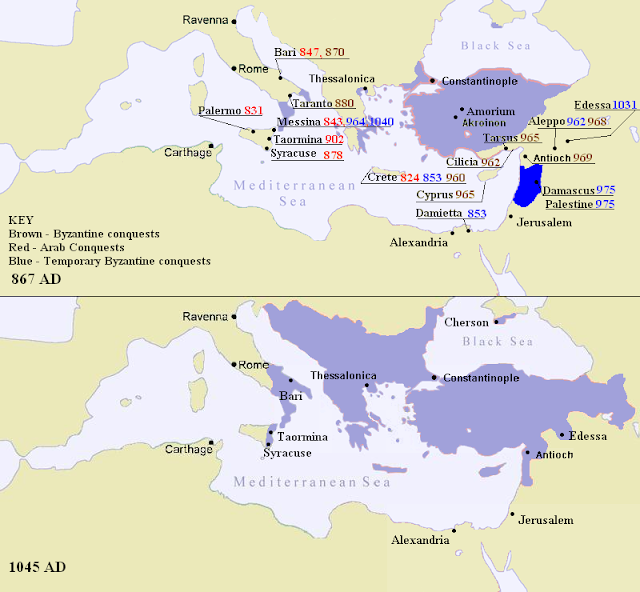 Cyprus since the beginning of the Eastern Roman empire's history was a province that belonged to the administration of the east.The capital of this authority was in Antioch.Cypriots were involved in dynastic wars as Licinius obliged them to help him against Constantine the Great.Licinius' defeat rendered the whole empire under Constantine's control.
One of the first moves of the new emperor was to reinforce the defences of the island in order to be able to deal with the constant pirate raids.He also sent a trusted person to govern the it called Kalokairos. Kalokairos failed Constantine as he was incapable and additionally he declared himself independent hegemon of Cyprus.This rebelion was suppressed and Kalokairos was executed.
The island tried to recover under the authority of Constantinople.However in parallel with the rebellion, Cyprus was also hit by a natural disaster as many earthquakes caused much devastation at the main cities of the island.The successor of Constantine emperor Constantius, took the initiative to rebuilt Salamina the capital of the island. As an honour for doing this, the citizens of Salamina renamed the city  Constantia

After the earthquakes, a starvation followed which during the 4rth century wiped out the majority of the population.
During the 5th cen. there is no event worth of rememberence except some ecclesiastical develpments as during emperor Zeno's rule Cyprus was an autocephalus archbishopric.
Since the 6th century under the emperor Justinian I Cyprus was under military administration along with the northern territories of the state and the islands of the Aegean.The historians presume that this weird administrative unit was created in such way so that the safe islands of the mediterranean would support economically the northern territories which suffered from barbarian raids.
During emperor Herakleios' reign Cyprus functioned as a shelter of refugees from Palestine and Egypt as a result from the constant wars of the Byzantines with the Sassanid empire.In the same period Islam started to spread in the Levant and Cyprus gradually was turned into a border province.

The first raids against Cyprus(7th cen.)

The Arabic conquests were really fast since the adoption of Islam as their main religion(622).The crucial battle in Yarmouk(638) was the deathblow for the Byzantines in the Levant.Consequently Jerusalem and Egypt fell some years after.
Thus the Arabs acquired rich territories with much population for making bigger armies and having higher tax income.Their next step was the creation of a strong fleet in order to attack the islands of the mediterranean.They used the knowledge of the conquered people who had long naval tradition.
The nearest and easier target for the Arabs in the area of the Eastern mediterranean was Cyprus.The first recorded raid of Arabs occured in 632 when Abu Bakr was still leader of the Arabs.However this source is strongly doubted as the Arabs hadn't finished conquering Syria during that time.
It is around 641 that we have certain information about an invasion on Cyprus.The leader of the Arab fleet consisted of 1700 ships was Muawiyah the governor of Syria and later the 5th caliph.During this invasion even Constantia the capital of the island was destroyed.The Arabs didn't intend to settle in the island and when the Byzantine fleet arrived they returned back to Syria.
Generally the territorial advantage of the Arabs helped them conduct numerous raids during the 7th cen. which were not recorded in Byzantine chronicles but only in biographies of Cypriot saints and Arab archives.
During Constantine IV Pogonatos reign the Byzantines agreed on various peace treaties with the Arabs.Essentially there is no change of the status quo until the reign of Justinian II who renewed the peace treaty by offering as a tribute 365 thousand gold coins, 365 horses and 365 slaves. It was agreed then that the income from the bordering provinces between the Arab caliphate and the Byzantine empire.Therefore Cyprus would also be turned into a "grey zone".However this changing of status would be really destructive for Cyprus in the future.
The suffering came really early. During even Justinian's II reign in 691 the emperor himself decided to break the peace treaty and forced the majority of the island's population to migrate to Asia Minor. By doing this the emperor thought that he would give an economic blow to the caliph as there would be no population in Cyprus to pay him taxes.The consequenses for the island were devastating as most of the island was deserted and much of the transferred population died of starvation and diseases.
The majority of the Cypriots were resettled in the area of Kyzikos near the Hellespont straits.There the emperor found a city called Justinianopolis. The reduction of the population cut off the prosperous economy of Cyprus.After 7 years in "exile" under order of emperor Tiberius II most of the Cypriots returned in Cyprus.
Tiberius thought that he should reinforce a border province with populations that were loyal to the Byzantine crown in order to defend better against the Arabs who continued to expand in Northern Africa really fast.

The Arab raids in 8th-9th century

After the sufferings of their exile, the Cypriots thought that a time of peace and prosperity would come. Indeed until the first half of the 8th century this happened.The rise of the house of Isauroi in the Byzantine throne and the failed siege of Constantinople by the Arabs in 717-718 gave the upper hand to the Byzantines who counter attacked. The crucial battle in Akroinon in 740 made the Arabs leave from Asia minor.Thus Cyprus remained away from the main war theater all these years.Additionally the transferring of the capital in Baghdad lowered the interest of the Arabs for the Mediterranean sea.
During those years we know that the Arabs attempted this time to transfer the Cypriots in Syria without success.In 746 we know that the Byzantine fleet arrived in Cyprus and by using the Greek fire they defeated an Arab fleet of 1000 ships from which only 3 managed to escape.
During this period we may assume that Cyprus was not under full Byzantine control as it was a land for exiled persons and for iconoclast monks.
In the beginning of the 9th century the emperor Mickael I sent priests in Cyprus to assist the pilgrims who were returning from the Holy lands.New tensions followed by Arab raids restart during Harun al Rashid's rule(786-809). The Arabs do not find any resistance as the Byzantines were involved in internal conflicts.
In 790 a rumour spread in Constantinople about a powerful arab fleet ready to attack Cyprus.Empress Irene who was regent of her son the emperor Constantine VI ordered the Byzantine fleet to confront them.In one of the naval battles around Cyprus the admiral of the Byzantine fleet was caught and sent to Baghdad. There he died as a martyr because he declined to convert.
The period of weakness for the empire would end when the emperor Nikephoros Phokas(802-811) would take the throne. Meanwhile Harun al Rashid himself conducted raids in Asia minor and detachments of the Arab army reached even Ankara.As a result Nikephoros used diplomacy once again to stop the Arab exapansion. The Arabs agreed to a peace treaty where they would receive large sums  of gold coins as tribute and a term that the Byzantines wouldn't rebuilt the destroyed castles in the border provinces.Nikephoros thinking that the castles were crucial for the defence of the state started to rebuild them.The Arabs considering that this was a violation of the treaty prepared extensive retaliation campaigns.The most highlighted was a destructive raid of Cyprus in 806.
The supremacy of the Arab fleet allowed the army to disembark on the island and loot. Cities were looted the rural areas were deserted and monasteries were destroyed.Many Cypriots were caught as hostages and were tranferred in Syria. Despite the ferocity of this invasion the Arabs didn't settle in the island. Contrary we have clues about the de jure control of the island by the Byzantines proved by a letter  sent from the patriarch Photios in 878 to the governor of the island called Stavrakios.
During the reign of Basil I(867-886) Cyprus became a theme of the Byzantine empire but not for long time as the Arabs restored the previous status quo of Cyprus as a grey zone.

In the 10th century the Byzantine interest for Cyprus was renewed.The emperor Leo the wise considered Cyprus of high strategic importance as the Byzantine fleet could gather there and attack Arab targets using the Greek fire.The Byzantines tried to maintain control of the area but not so successfully.In 904 for instance the Arab fleet of Leontas Tripolites which sacked Thessalonika used Paphos as its port.

The sacking of Thessalonika was just one episode of the numerous raids conducted by Leontas Tripolites who took advantage the absence of the Byzantine fleet which was sent to defend Sicily which also fell to the Arabs in 902.
Emperor Leo sent the admiral Himerios to pursue Leontas and after much wandering he found inveded Cyprus. There he treated the Arabs of Cyprus with cruelty as a retaliation for the raids.
This act was considered by the Arabs as a violation of the neutrality of the island and an Arab  fleet under admiral Damianos invaded Cyprus pillaging and looting everything on their path,capturing  Cypriots as slaves or exchange hostages.Although there is no involvement of Cypriots in what Himerios did to the Arabs of Cyprus,  Damianos' cruelty cannot be justified as the Cypriots continued to pay their regular taxes to Baghdad.
In 913 most of the Cypriot hostages returned back to Cyprus grace to the bishop of Kythraia Demetrianos and the patriarch of Constantinople Nikolaos Mystikos.In the next years the Arabs faced many internal problems and stopped their raids against Cyprus.On the other side the Byzantines with skilled military leadership under Nikephoros Phokas restored their supremacy in the eastern mediterranean and in 965 under order of Nikephoros Phokas the general Niketas Chalkoutzes liberated Cyprus.