A mini battle of Marathon live in 2011 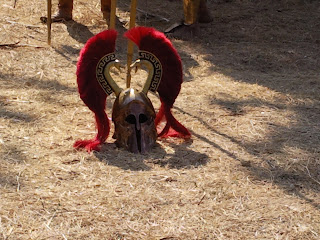 To celebrate the 2.500 years anniversary of the battle of Marathon  a group of historical battle reenactors arrived in the original sight of where the battle of Marathon took place to re enact the confrontation of the Persian army against the Athenian and Plataean hoplites.  The whole event was organised by an experienced man on experimental archaeology called Christian Cameron. Every reenactor has spent a lot of money for acquiring their armour and weapons and the whole project seemed to be very promising if the state would support it.There would be an ancient archery display, an ancient Greek festival  and an ancient camp of Persian and Greek tents.

Unfortunately the modern Greek state doesn't pay so much attention to the ancient Greek past for many and complicated reasons that involve the politics the greek society etc. For any other country to organise and fund such events is something common as it would attract tourists and it would  be a way of getting in touch with history. However historical reenactement is an uknown phrase here in  Greece.

As a result  the indifference by the Greek state discouraged many of the reenactors(there were supposed to be at least 500)and eventually the battle was re-enacted by fifty hoplites and seven Persians. This mini reenactement can be counted as a success considering that they were not granted by the Greek state permission to use an area for the "battle" they were denied access to the archaeological area of the tumulus of the fallen warriors of Marathon.

The re enactors have not lost their courage and they plan to return in three years hoping that they will be less unwanted. It's worth to note that the municipality of Marathon was the only authority that  supported the reenactors.

I am very happy to read this article..thanks for giving us this useful information.