It’s strange that we in the West have not hitherto paid greater attention to the study of the Byzantine world, the lineal descendant of Rome, and that Constantinople is often viewed as somehow disconnected from the Ancient Roman world when in no way was this true. Byzantium was the closest the medieval world came to fielding a super power, was unquestionably the cause of the Renaissance, and was a military force so pre-eminent that victories were routine, while defeats were studied and celebrated by that culture. There is so much to fascinate us there, and yet, we still have a long way to come in terms of appreciating it.
Between the Catholic world and the Islamic however, much has been done to throw sand over the legacy of the Romans; though we have the great fortune to live in an age where the religious and cultural reasons for suppressing the memory of Byzantium are now being swept aside in the interest of knowledge of the longest lived Empire mankind has ever produced.
Byzantine Swords represent a tradition of swords that is both familiar to the Western tradition and completely alien to it. The traditional and well trod Oakeshott Typology, as useful as it is in categorising the swords of the Catholic West, is at odds with the swords of the Byzantine World. However A. Bruhn Hoffmeyer established a typology for Byzantine Swords that is infinitely more relevant in 1966:

There are many swords which have now been identified as Byzantine which will be discussed and examined in due course. Of great use to the student of the Byzantine Sword however is depictions in Byzantine Art, which frequently show in amazing detail the Byzantine Sword as it existed in the Byzantine World contemporary to the artwork.Below is one such example showing a cruciform sword with a Type R (spherical) pommel. It is worth noting here that the Byzantine fondness of the Type R pommel extended from antiquity right through until the fall of Constantinople to the Turks in 1453:

Furthermore sometimes the Type R pommel was not peened but was attached by way of a rivet in the manner of the swords of the cavalry of the steppe:

Here the Byzantine Spherical pommel is depicted on a slightly curved one edged sword referred to as the Paramerion: Here the Type R pommel is shown affixed to the end of a hand and half or two handed sword of the later Medieval period:

This example shows another classic cruciform design also showing a Byzantine preponderance towards hilt furniture of copper alloy, as well as spherical pommels:

One the many advantages of the Type R pommel is that it allows a pommel to have a smaller profile, as a sphere contains more mass than a disc of the same profile, which can be used to create a pleasing aesthetic such as in these examples:

This example shows a slightly flattened sphere with a Romanesque peenblock:
Below is a sword the Dr. Timothy Dawson has indicated is more likely than not Byzantine in origin, by way of decoration on the blade and its unusual (for the West) globular pommel:

The same sword was examined in Ian Pearce’s Swords of the Viking Age, below is an extract detailing the sword:

A tradition of swords existed throughout Constantinople’s history as a Christian Empire that very closely emulated the slender and long styles of swords of their Persian neighbours. The Hoffmeyer Typology lists examples at numbers 11 & 28 – 31.These swords tend towards a lenticular or pillow cross section and came in single and double edged varieties. More often that not they had parallel edges for most of the blade’s length.

Frequently the swords had a metal cross guard, but either no pommel, or an organic pommel, but in either case it is likely the pommel was a continuous part of the wood of the handle.
In other cases the swords featured copper alloy cross guards with sleeves which extended down the blade, which would enclose the mouth of the scabbard, thereby precluding rain from entering, and a grip and pommel that were attached with rivets. This method of construction extended to other types of Byzantine Swords.

This sword find from the Serce Limani shipwreck has previously been designated as Islamic in origin, but has now been confirmed as Byzantine and corroborated with contemporary pictorial evidence by Professor Valeri Yotov.It features a lenticular blade form, most of which is lost, and shows the Byzantine custom of a sleeve like projection running down the blade. It too is attached to the blade by way of rivets.

Below are accurate measurements of the find for interested parties (for some reason measurements are given in metres):
This is an example of style that was popular in Byzantine in various forms, which featured a square pommel, the square sitting on its corner rather than sitting on its side:

The pommel on this sword is somewhat like a flower bud:

The ‘Spanish’ style of hilt is represented in Byzantine Art, but who influenced whom remains a mystery. This sword below features the Spanish style of hilt, but this style of blade may or may not have enjoyed contemporary use, or may have been artistic license. Raeffele D’Amato believes forward curved swords were in use in a period continuous from antiquity. 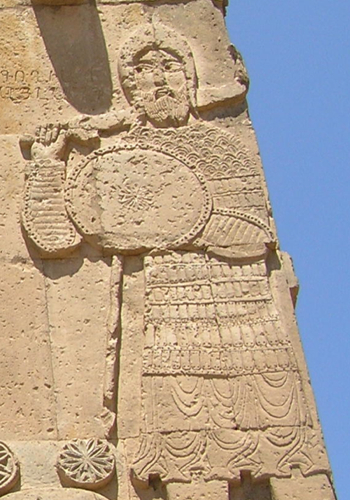 An example of a very large, almost Claymore-like, Byzantine Sword: This Serbian Warrior Saint is equipped in the Byzantine fashion, the ikon comes from the late Byzatine period. This fresco, referenced in part above, shows both a beautiful example of a Spathion and a Paramerion.

This image appears to show a Byzantine Sword like the Serci Limani shipwreck example:

A slender, compact cruciform sword from the late Byzantine Period.

There is a high probability that this sword as depicted in Oakeshott’sRecords of the Medieval Sword is Byzantine in origin, given its form being an anomaly in the West, but extremely common in the Byzantine Realms:

A beautiful Byzantine Sword showing an offset fuller, much like those still found on Caucasian Qamas.

As previously touched upon the Byzantine way of war frequently utilised a curved sword adapted from the Avar sabre. This appears to have been, for the most part, single edged, though pictorial sources seem to indicate that double edged variants may have existed.

The image of the sword comes courtesy of Raffaele D’Amato and shows a find from Bulgaria. It was located at the site of a Byzantine battle and was the possession of a Varangian Guardsman. What is so exceptional about this specimen is that it clearly demonstrates the mixed nature of the panoply of the Varangian Guard, even down to individual items. This is a Viking Sword but with a distinctly Byzantine cross guard.

Below is another example of the mixed nature of Varangian Guardsmen’s gear. This sword (bottom right) is a Viking Sword but with a grip and pommel riveted on in the style of Steppe Swords. It has been identified as Byzantine by Professor Valeri Yotov.

Our Lord and Saviour, comes: “not to bring peace, but to bring a sword…” (Matthew 10:34) Note again the comparatively compact hilt configuration.

Unfortunately it is no longer possible to discern what sort of pommel this sword bore, but the blade and guard are beautiful examples of the Byzantine style. A rare depiction of a Byzantine wielding a dagger. This weapon also bears the pommel style the Byzantines made their own – Type R, or the spherical.

This image from a Byzantine site in Kosovo again depicts J.C., this time with a beautiful onion pommeled sword:

A spectacular late Byzantine example with a globular pommel and stiff medial ridge:

It is not uncommon to see Byzantine examples of swords with guards which turn downward towards the hand. This configuration is sometimes seen on 20th and 21st century knives. It is surprisingly comfortable when used with a stiff wrist and strong arm.

The onion pommel together with the very Byzantine spherical peen block:

The Tetrarchs from late antiquity bear swords in the Romano-Persian style of the kind that were also implemented by Eastern Romans then and in the early medieval era:

Spherical terminals mark the ends of this crossguard, a very common feature on Byzantine swords:

Another demonstration, this one particularly exquisite, of the Byzantine preponderance for small and refined sword hilts:

Unknown but remarkable for the detail on the scabbard:

This example is best described as bearing the ‘pillowed’ style of guard that found favour in Byzantium:

These examples appear from time to time. I am uncertain whether they are of the ‘mushroom’ style or lobed, in other words somewhat cylindrical or flattened, as a result of artistic license. The mushroom style is corroborated, the lobed I am not as sure about:

Paramerions, showing the variety of shapes they came in:

This example from the 13th century:

A very interesting example showing a sword without a crossguard? Μybe a Byzantine Romphaia?