It's the geopolitics st*pid!

From time to time i post interesting articles that don't have to do with history but with the present time. But the present too can be arguably considered history in the making. Anyway, i found this article in euobserver written by a Polish pm concerning the Greek recession and the importance of Greece for the Eu contrary to the Eu heads statements that a Greek collapse is not going to affect anyone else rather than the Greeks. 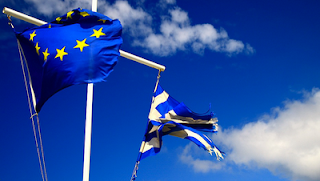 The eurozone decided to grant Greece a second bailout, but this does not mean that the country received a wallet full of money and that the risk of default is gone. Greece and its political elites need sober determination to implement socially difficult reforms also after the April elections.
The Union has once again demonstrated its solidarity with Greece and the fact that it is demanding to supervise the effectiveness of its aid does not surprise. We cannot perceive the presence of EU experts in Athens in terms of loss of sovereignty.
The situation is serious. Without EU support and further tranches of financial help the country's default is certain and the return of the drachma would bring about a much deeper crisis.
The danger lies, however, not just in the financial aspect of the Greek crisis, but also in its potential geopolitical consequences, in particular the possible destabilisation of the South-East flank of the European Union. We must not forget that all this is taking place very close to the hot spots of the Middle East, the Arab countries of North Africa and the still unstable Western Balkans.
Given its geographical location, Greece is a crucial transit country for EU energy supplies coming from the Black and the Caspian Sea basins. It is a key element of the EU's energy security strategy - the Southern Corridor, which is to bring about oil and gas supply diversification, a reduction of EU's dependence on Russia and a decrease in energy prices.
Greece is at the same time a country favoured by Russia, as we have seen many times in the past, most notably recently when Russia cut supply to energy-starved EU, it increased the supply to Greece above the contracted volumes. It cannot be excluded that in the case of helplessness or ineffectiveness of the EU, Russia could offer help which would go much further. The same goes for China which is already the owner of the Piraeus port.
Greece is not only a member of the EU, but also of Nato. Its army and navy consume 4.3% of its GDP and are a crucial component of the military and maritime balance in the Eastern part of the Mediterranean Sea.
The country is also the warden of the longest EU border of the Schengen area, and one which struggles with strong migration pressure from the South. Destabilisation in Greece would mean it not only leaving the Eurozone, but also withdrawing from the Schengen.
A weakening of democracy in Athens, with the possible military involvement to maintain order in the worse of foreseeable scenarios, would be catastrophic for the European Union and its image in the neighbourhood - both the south and the east - as well as in the world.
In particular, it would damage the perception of EU's role as the stability guarantor and a democracy exporter. Hence the long-term consequences of a lack of resolution of the Greek crisis would go beyond the purely financial and economic aspects, and would be grave geopolitically as well.
We need therefore to leave behind the prevailing, predominantly accounting-like approach to the Greek debt. We need a political solution, with the geopolitics kept very much in mind.
The evil - in the form of the indebtedness crisis in Greece and elsewhere - has transpired. The lessons for the future have been learnt and acted upon through the 'six-pack' and the fiscal compact, both of which will now further change the Union's order.
Greece, whether with the euro or the drachma, remains a matter of European responsibility and solidarity. Notwithstanding the trespasses of the Greek and others, we are now confronted with the most serious test of the credibility of the European construction. Withdrawing the support for Greece can spark off further reduction in the scope and depth of the European acquis. Should it fail to bring results, it will have an impact on the future doctrine and the practice of European solidarity and cohesion.
Hence it is important and necessary to prescribe a treatment which is protective and preventive, and not a crude amputation. This is not only about Greece. We have to save Europe from the dangers and the potential consequences it is now facing, on a political level not just on an economic one.
If the situation gets out of control it could easily and profoundly affect European security. This should be part and parcel of the European cost-benefit analysis as well as its strategic reflection. One would dare to say, travestying and turning around former US president Bill Clinton's phrase: it's the geopolitics, stupid!
Jacek Saryusz-Wolski is a Polish member of the European Parliament, a former president of the foreign affairs committee and a vice-chair of the European People's Party
source:http://euobserver.com/7/115533