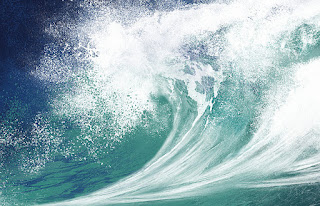 When in 2004 the destructive earthquake of Sumatra in Indonesia created a tsunami which swept everything standing on its way along with 220.000 lives,then the linguistic senses of the media reacted automatically.


Since then once we want to describe a phenomenon which brings harsh, sad, hurtful and irreversible disasters
then we call it a tsunani even if for example the phenomenon is relevenant with harsh economic measures.

A Tsunami most frequently may be created in the Pacific but we should not forget that the biggest one in power, intensity and historical importance was the Tsunami created after the explosion of the Santorini volcano. The gigantic waves which are estimated  30 meters high were triggered by the collapse of the volcano which fell on the sea.This disaster not only affected the Minoan civilization which could never again regain its old strength but modern estimates  show that the waves reached even Israel and Egypt.


Somewhere in between  history and legend, however with the weight leaning towards the legend, we have the narration of the lost civilization of Atlantis which may have been lost by a tsunami. Only Plato refers to this civilization and makes it an example of a perfect regime.Science cannot give a definite answer as whether a tsunami destroyed Atlantis or if even Atlantis ever existed.


Many centuries later the first tsunami which is recorded in the historical times is the one in Potidaia in northern Greece in 487 BC by which the Persian fleet which was about to invade Greece was destroyed according to what Herodotus says.


One century later in 373 BC  a thousand years old city called Elice vanished in a couple of minutes. One earthquake of 7 Richter magnitude caused an instant subsidence of the ground over which the houses were founded. A giant basin was created and the city was in it. Within some minutes a tsunami came an flooded everything.Pausanias wrote than Elice the mother city of other 12 Ionian cities was destroyed suddenly by an earthquake and giant waves which had the height of tall trees.


In the 4rth century the Japanese word Tsunami was unknown but Aristotle describes specifically in his work called Meteorologica that earthquakes cause the creation of large sea waves. He also made a map showing which are the most exposed areas in a case of a Tsunami.Among these areas was Achaea, the Hellespont,Corinth and Sicily.

Thukidides is clear when he describes in his 3rd book of history that in 428 BC and while the Peloponesians had proceeded as far as Isthmus to invade Attica and Athens, some sttrong earthquakes forced them to withdraw. From these earthquakes large waves were created and hit the islands of Euboea and Skopelos.

Knossos, Gortyna  and many more cities of Crete were destroyed by an earthquake in 365 AD during which most of the island was flooded by water. Various sources make word about large waves reaching the Greek mainland Egypt and Dalmatia.

The 7 Richter that hit a town called Diakofto in 1402 AD created waves that proceeded 1,2 kilometres inland
In the website of the Greek institute of geodynamics there is a full catalog about the years that tsunamis hit Greece.