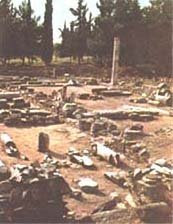 New Anchialos is located in Magnesia in Central Greece. 30 years before it was a small village but now it has become an almost small city.
N. Anchialos took its name from from the greek refugees who fled from the city Anchialos in 1906 when the bulgarian troops occupied the city.They chose the spcific site for their new home because it was a coastal place . N. Anchialos is built over the ruins of the ancient city of Pyrassos.
Everyone who visits the N. Anchialos can see the remnants of the old akropolis and many columns of themples of the Roman era.
Nowadays the small city is inhabited also by people who came from the surrounding villages
as there were many financial opportunities in a new society. The great development over the last years brought many tourists in the city. The coastal road is only for walkers and along there are many bars,clubs and coffeeshops. The sandy beach is big enough and the sea is clear.

Magnesia undoubtely offers us much better touristic spots like Pelion or the islands called Sporades.However i think that it would be right to show less advertised touristic spots.N.Anchialos is one of them. It's worth visiting
Αναρτήθηκε από Spiros